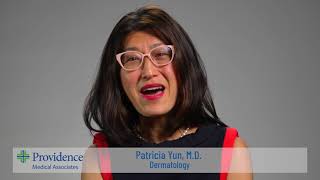 Dr. Yun graduated cum laude from Yale University, attended Harvard Medical School and completed her dermatology residency at Columbia University. She completed a subspecialty fellowship in clinical laser & laser research at Harvard Medical School’s Massachusetts General Hospital. In addition to general and cosmetic dermatology, Dr. Yun has expertise in laser surgery. Working closely with pioneers and leaders in the field, she has completed numerous research studies utilizing the latest in laser technology. Dr. Yun is also highly trained in other cosmetic procedures such as the use of Botox, numerous filler substances, and sclerotherapy. Dr. Yun is published widely in scientific and dermatology journals and is a member of the American Academy of Dermatology and the American Society for Laser Medicine and Surgery. She has been in private practice in New York City and has served as attending staff at the Columbia University Medical Center. She has been practicing in Southern California since 2002 with tremendous demand for both her aesthetic and general dermatology expertise.